As a trade-off for mobility, the shoulder lacks some of the stability found in otherjoints. The shoulder is under considerable stress during many commonly performed weight training exercises and, as a result, is frequently injured. Shoulder pain is often taken for granted or ignored by many bodybuilders. For example, anteriorshoulder pain felt secondary to performing bench presses (ie,achieving a "burn") is frequently assumed to be a sore anterior deltoid muscle from a hard workout. It may, in fact,represent a sign of rotator cuff strain or impingement. 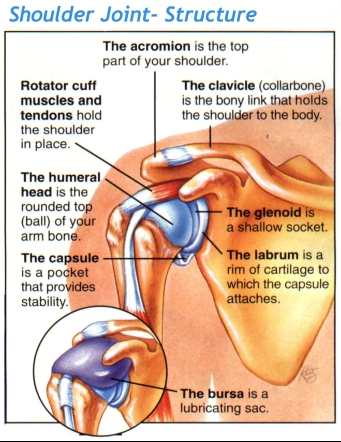 A major factor in shoulder impingement injuries in weight lifters is the muscle imbalance syndrome , highlighted by overly tightshoulder internal rotators and weak shoulder external rotators. A substantial portion of the typical trainingprogram is dedicated to training the pectorals and the lats. Both tend to produce internal rotation of the shoulders. The external shoulder rotators (the infraspinatus and the teres minor) are often neglected.

There is considerable stress imposed on the rotator cuff muscles during the performance of many exercises, such as the bench press. Too many sets of exercises for the same body part with excessive weight can result in fatigue and overload injury to the rotator cuff. Therefore, weightlifters should be encouraged to perform fewer sets and no more than12 sets per body part, including warm-ups.

A common exercise is the lateral raise with the shoulder in internal rotation.The lifter is often instructed to point the thumb down as though pouring water from a pitcher in an effort to better isolate the side deltoid. It may be true, but there is a risk of accelerating or aggravating an impingement syndrome. Lateral raises should be performed face down on an incline benchpositioned at about 75 degrees up from the ground. This position will isolate the side delts without creating impingement. 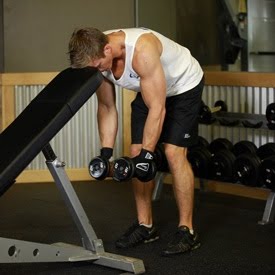 Another common mistake is raising the arms above 90 degrees while performing sideraises. Unless the thumb is pointing up, this position may increase the risk of impinging the rotator cuff tendons under the subacromial arch. Shoulder protraction is associated with narrowing of thesubacromial space. Allowing the shoulders to become protracted forward beyond the neutral position during the performance of exercises such as bench presses may increase the strain to this area.

Anterior instability of the glenohumeral joint

Instability may be due to a single-event trauma where the capsule and glenoid labrum are torn or may be a traumatic representing a tendency toward a loosejoint capsule. When either inherently loose or torn loose, the capsule may be unable to support the shoulder in the extremes of abduction and external rotation. Therefore, exercises that place the shoulder in this position should be modified or avoided such as the behind-the-neck press, the behind-the-neck pulldown, and the pecdeck .

It may also occur from repeatedly hyperextending the shoulder during the performance of bench presses,flyes, and the pec deck by lowering the bar or dumbbells to the point where the elbows are behind the back. Weight lifters not only place their shoulders in an abducted/externally rotated or hyperextended position, but also do it with considerable weight held in their hands. The general principle to use is to avoid positions in which the elbows extend behind the coronal plane of the body. It is important to remind that overhead positions are less stable and therefore more risky. While instability is often caused by gradual repetitive capsular stretching injury, Olympiclifters tend to suffer instability resulting from a single-eventtraumatic injury. They often lose control of a weight while holdingthe weight in an overhead position.

It should be noted that the diagnosis of anterior instability may be overlooked due to a misleading response to testing.pain is often experienced in the posterior shoulder when the arm is placed in an abducted/externally rotated position. It is thought that this posterior pain arises from traction or compression of the posterior structures as the shoulder subluxates forward. Also, anterior instability may be misdiagnosed as a rotator cuff strain.

The load and shift test is a form of instability testing that involves passively translating the humeral head while stabilizing the glenoid. This test may be performed  in various positions, including seated with arm by the side, seated with the arm in the abducted andexternally rotated position, and supine with the arm abducted and externally rotated. Excessive forward excursion of the humerus associated with either pain, apprehension, or clicking may all beconsidered positive signs.

The relocation test should reduce the positive findings. This test involves restabilizing the humerus by pushing the head of the humerus from anterior to posterior whileplacing the arm in the "apprehension" position of abduction/external rotation. The relocation test is performed  supine. Care should be taken to support the arm to avoid protective muscle spasm.

There have been a number of reports in the literature of suprascapular nerve injury either via stretch or compression. Abduction of the arm against resistance has been implicated as the mechanism of injury. The lateral raise and the shoulder press are two exercises that involve abduction against resistance.

A number of reports document the occurrence of tears of the pectoralismajor muscle or tendon, usually from bench pressing. The tendon may either avulse from the bone, tear at the musculotendinous junction,or tear in the muscle itself, usually near the musculo tendinous junction. Most of these injuries occur while the arms are extended behind the chest. To prevent such injuries the lifter should avoid lowering the bar to the point at which the shoulder is hyperextended.Regular stretching may be helpful.

An entity known as atraumatico-steolysis of the distal clavicle has been reported in a number of studies as being related to weighttraining. This condition, referred to as weight lifter's shoulder, is marked by pain at the acromioclavicular joint while performing the dip, bench press, clean-and-jerk, and overhead presses. Radiographsshow osteoporosis and loss of subchondral bony detail at the dista lclavicle. In addition, cystic changes may also be present.

Atraumatic osteolysis is believed to result from repetitive loading of the acromioclavicular joint resulting in neurovascular compromise to the distal clavicle. Management is difficult given that most patients are serious lifters. Either a dramatic reduction in weight,elimination of the offending maneuver, or substitution of exercises may be suggested. Alternatives to the bench press include a narrowgrip bench, cable crossovers, and the incline or decline press. Ifunsuccessful, elimination of heavy lifting for 6 months isrecommended. There is some evidence that those treated surgically with amputation of the distal I to 2 cm of the clavicle are able to return to some lifting. However, many athletes are not able to returnto a pre-injury level of lifting.