While not as common as back injuries, neck injuries occur fairly frequently in weightlifters. Cervical spine problems include mechanical sprains and strains, disc injuries, and brachial plexus injuries. Soft tissue injuries may result from protruding the head forward or from unnecessarily tensing the neck while weight training. Some problems result from a muscle imbalance syndrome similar to the "uppercrossed syndrome" .

This problem occurs because of imbalance in training programs that involve an in ordinate amount of exercise for the pectorals, the front delts, the lats, and the biceps and very little training of antagonist muscle groups.The result can be overly developed and tight pectoralis major and minor,latissimus dorsi, front deltoids, trapezium, biceps, and stemocleidomastoid muscles, especially if proper attention has not been given to maintaining flexibility in these muscle groups. It is often accompanied by relative weakness of the middle and lower trapezium, rhomboids, the upper thoracic extensors, the deep neckflexors, the rear delts, and the external shoulder rotators (the infraspinatus and the teres minor) It results in the rounded shoulder, forward head posture frequently seen in bodybuilders.

Exercises in which the head is allowed to nod or protrude forward may contribute to cervical spine injury by either promoting the postural defect noted previously, or by predisposing the athlete to cervical disc problems.The tendency to jut the head forward in exercises such as shrugs, behind the neck presses, behind the neckpulldowns, lateral shoulder raises , triceps extensions,curls, incline leg presses, and abdominal crunches promotes the development of the rounded shoulder, forward head posture. This posture is associated with abnormal mechanical function of thecervical spine. It is characterized by adaptive shortening of the suboccipital muscles, the stemocleidomastoid and the anterior scalenemuscles, and excessive tension and weakening of the long cervicalextensor muscles, the levator scapulae and the scapular retractor muscles. 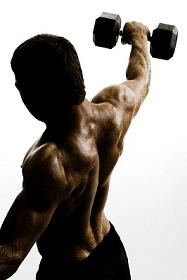 Protraction(protrusion) of the head during exercises in which the neck musclesare under load has also been linked with an increased risk of cervical disc derangement (herniation). The forward head posture results in anterior shearing and increased compression of the lower cervical discs as the head slides forward and the upper cervical spine becomes hyperextended. Forceful contraction of the trapezium,the sternocleidomastoid, and the other cervical muscles will increase the load on the cervical discs and the facets. This finding correlates with an epidemiologic study that found that weighttraining, particularly with free weights, was associated with an increased risk of cervical disc herniation. Cailliet claims that this forward head posture also leads to accelerated degenerative changes in the cervical spine. He notes that each inch the head protrudes forward of the trunk results in the equivalent load of an extra head that the neck must support. 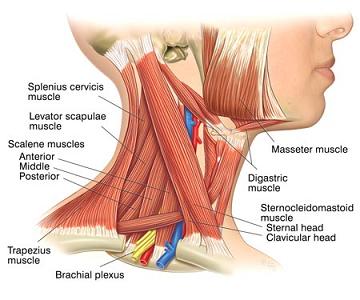 It should be noted that during the performance of some exercises, untrained lifters commonly not only protract the head but also tense and flex the neckforward during the performance of exercises. This action occurs most frequently with curls, lateral raises, and leg presses. This habit may be even more damaging than simply protruding the head. Beginning with the novice athlete, bench presses-both flat and incline-arecommonly incorporated into weight training and may be involved in the cause of cervical spine injury. It is not clear whether the injury occurs from protrusion of the head as the bar is lowered or from forcibly hyperextending the neck (ie, driving the head backward intothe bench) as the weight is pushed up.