In both youths and adults the most common weight training injuries involve the lowerback. The mechanisms of injury include hyper flexion, hyper extension,torsion, and overdevelopment and excessive tightening of the iliopsoas muscles.

The most common back problems are mechanical sprains and strains; however, disc injury or spondylolisthesis may also occur. Spondylolisthesis may be due to the stress imposed at the neural arch while performing exercises that involve repetitive lumbarspine flexion and extension under load. It is particularly true of dead-lifts. 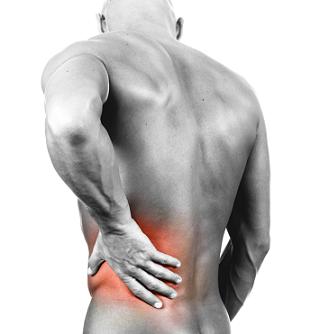 The greatest number of weight training-related back injuries result from exercises in which the trainee is in the flexed posture, such as rows and dead-lifts. A bent barbell row is often performed standing with heavyweight held at arm's length while bent at the waist and the legs held straight. This position creates perhaps the greatest amount of contractile tension on the lumbar spine musculature and the greatest lumbar disc pressure.

A frequent error is to allow the back to round and then to jerk the weight up using the hip muscles to generate power. Lumbar flexion while lifting results in the load being shifted from the back muscles to the posterior ligaments, the thoracolumbar fascia, and the lumbar discs.

The lower back muscle stop contracting when the spine is sufficiently flexed, a phenomen onknown as the flexion relaxation response of the erector spinae.It may result in injury to ligaments or discs.

The seated cable row exercise may also result in a hyperflexion injury to the lumbarspine, a problem often encountered in this author's practice. The injury usually results from leaning forward at the starting point of each rep, allowing the spine to flex, in an effort to get a goodstretch.

Extremely heavyweights are sometimes used in weightlifting exercises. As much as 1,000 lb can be used in the squat and dead-lift. While steadily applied compressive forces alone rarely injure the disc, rupture ofthe vertebral end plate or fatigue microfractures of the trabeculaeof the vertebral bodies may result. 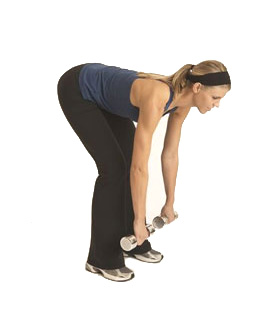 Hyperextension can cause abnormal loading of the facet joints and the capsules,resulting in an inflammatory response. It can also increase the load on a pre existing spondylolisthesis, resulting in greater strain to the supporting tissues. The solution is to contract the abdominals while pulling the hips against the bench in order to maintain a neutral lumbar positive. In addition, patients should be advised to avoid using too heavy a weight or overstraining at the end of a set.

Injury to either the facets or the discs may occur from rotational exercises such as twists or from the rotary torso machine. The lumbar spine is particularly vulnerable to torsional forces. Due to the sagittal orientation of the facets, only a limited amount of rotation canoccur in the lumbar spine. Additional rotation may result in injuryto the facets or shearing of the discs. Research  suggests a link between twisting while lifting and an increased risk of disc herniation. 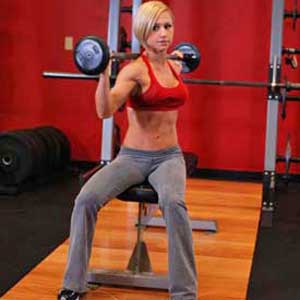 Many commonly performed abdominal exercises may contribute to lower back injury through overdevelopment and tightening of the hip flexor, iliopsoas muscles. When the iliopsoas Muscle contracts, it exerts both increased compressive and shear forces on the lumbar spine.

Many abdominal exercises are actually exercises in which the hip flexor muscles rather than the abdominals perform much or all of the work. These exercises include full sit-ups, straight leg raises, high chairand hanging leg raises, crunches with the feet hooked under a sofa oran apparatus in the gym, V-ups, Roman Chair rocking crunches, and most abdominal machines. Hooking the feet under a stationary objectfor support increases the tendency for the hip flexors to be recruited during sit-ups.